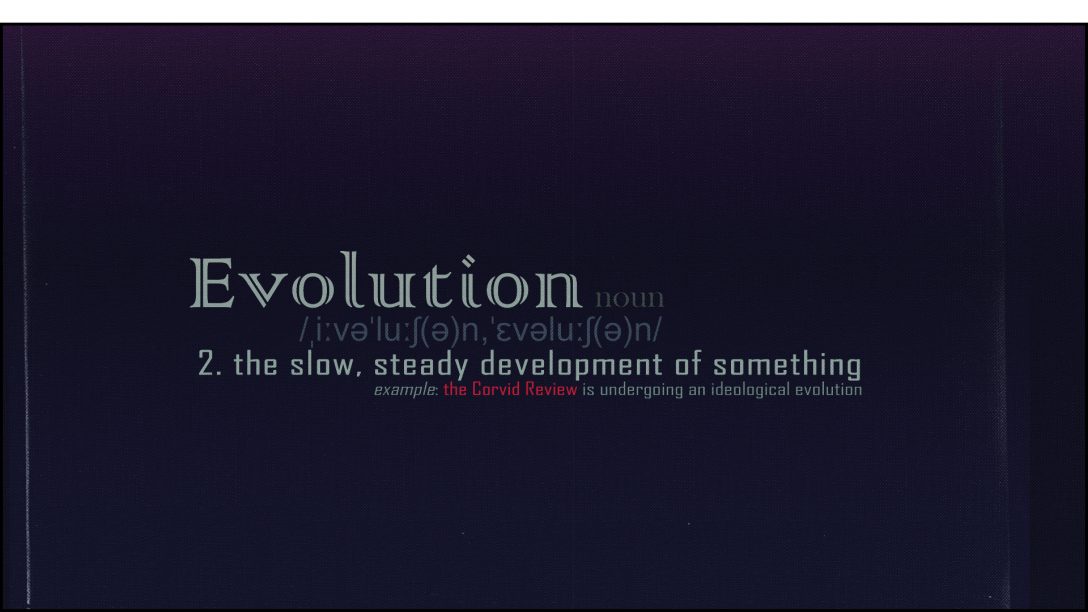 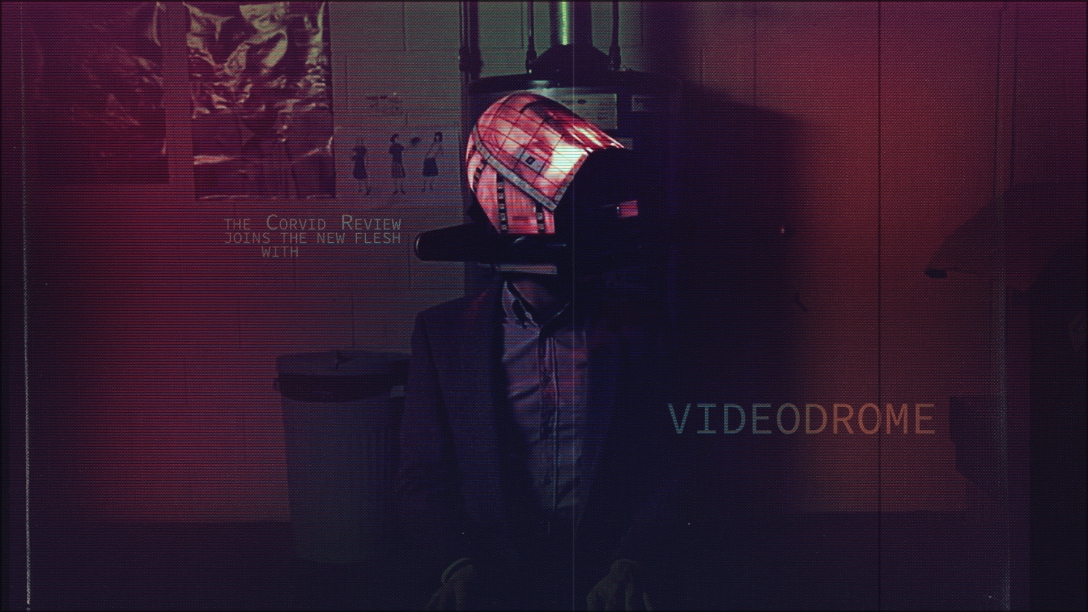 a review by the Crow.
this review is long overdue. Two years overdue to be precise.

A long time (and it is a long time, now) ago, I mentioned how I once came across a video collection that included almost all the obscure movies I know of. Among those movies were titles such as Astenicheskiy sindrom (which may appear on The Corvid Review, soon) and Possession, the latter of which has since become one of our most popular posts (and will be undergoing a much-needed makeover on its anniversary, this year). And it was that very same collection that set me upon the path towards Videodrome.

Considering that the movie has held its spot on my top 10 horror movies list for two years running, it’s high time I reviewed it.

With all that said, let us see if we’re ready to join the New Flesh in…

Videodrome was Mr Cronenberg’s first major success, and although it flies under the radar these days, I consider it to be one of his best works, especially in light of the world it paints.

The world of Videodrome is the world of 1992, as seen by the eyes of people living in 1983. There is no internet, there is no reliance on telephones. There is only… television. People communicate over television, they spend most of their lives watching television. There are “missions” set up around the city where homeless people are made to watch television for hours at a time. And hanging over all of this is the enigmatic Dr Brian O’blivion (Jack Creley) — a Big Brother-esque figure who tells us early on that:

“…television is reality, and reality is less than television.”

We follow Max Renn (James Woods), the president of a controversial TV station known as Civic TV — airing on Channel 83, Cable 12 — which markets itself as “The one you take to bed with you”. Renn is on the lookout for new programming, and it’s made quite clear to us that Civic TV is about as bottom of the barrel as far as television goes. The channel specialises in softcore pornography and the like — programming which Renn publicly defends. Renn lacks enthusiasm for anything he considers “soft”, and bemoans the fact that he can’t find the “tough” kind of material that’ll help his channel break through.

And then he finds it. It’s name? Videodrome.

Harlan (Peter Dvorsky), a content pirate who works for Civic TV, shows Renn a brief clip of programming appearing to originate in Malaysia. The content? A woman being tortured by two masked men in a room with wet, red clay walls.

Renn becomes obsessed with finding the source behind Videodrome, so that he can include it in his channel’s programming. And the further he seeks the source, the more he gets drawn into a vast conspiracy that is seeking to ‘ethically cleanse’ the North American population.

The movie soon lurches us into nightmarish visions, which we see through Renn’s eyes — hallucinations induced in him by Videodrome. The movie doesn’t shy away from displaying body horror in all its grotesque glory; and the effects, with the exception of two instances, hold up rather well all these years later. On the technical side of things, Videodrome is a really well made production, and I can’t fault the movie for any of its choices. The final scene lingering on Barry Convex (Leslie Carlson) is a little suspect, considering Renn escapes the scene and isn’t there to hallucinate it, but this is only a minor issue. Overall: a very good job by the team.

It’s at this point that I want to address what I find makes Videodrome significant, and why I consider it to be as good as it is. Videodrome is prophetic.

While this is certainly not what Cronenberg had in mind during 1983, Videodrome actually becomes scarier when you take television out of the equation and replace it with a more modern phenomenon: the internet.

The original story revolves around ‘ethically cleansing’ those who seek out questionable media on television — with what counts as questionable being defined by those in power, such as Mr Convex. The medium of television is intended to cause a mass slaughter — a classicide, if you will — to strengthen the minds of the North American peoples.

And now, as I said, supplant television with the internet. Keep in mind how often you spend on the internet, how often you Google things, or watch videos on YouTube, or maybe browse Facebook. And then, imagine that hidden amongst a certain type of content, is a weapon designed to destroy the mind.

Videodrome might have been talking about television — a phenomenon which is slowly being phased out in its original form — but by a simple extension of its ideas, we can see that Videodrome has effectively made itself timeless. The internet isn’t going anywhere, and Videodrome‘s ideas still apply.

Of course, the content that kills within the movie is the kind of thing most people wouldn’t look at: “snuff TV”, as Harlan describes it. And yet, there are websites dedicated to viewing disturbing content, vast recesses on the dark web that so many people find fascinating to explore (if most of those accounts are to be believed). But you could easily apply a different kind of content as the kill switch for the ‘Videodrome effect’, and the horrors compund.

Given what is currently going on with surveillance, monitoring, and censorship, especially when it comes to certain governments, one could very much see the application for something as silent and deadly as the Videodrome effect. If only it weren’t so messy, it would be the perfect tool. It makes its victims suggestible to “programming”, and eventually kills them after launching them into nightmares.

But then again, is it messy? How much of the violence we see simply Renn shooting people? It’s pretty evident that within the movie, all of the nightmares are all in the character’s head. Add to that, that the murders Renn carries out are only because he was suggested to kill, and not because he wanted to kill.

I spoke earlier about the recesses of the dark web. While I don’t want to get too far into this topic, something I was made aware of a few years ago was the existence of web pages called “red rooms”. Apparently, on these pages, people can sign up to view live torture, and even murders. How widespread or true this phenomenon is, I cannot tell you, but it is something within the realm of possibility. The reason I’m bringing this up is because the room we see in Videodrome (the show within the movie) has wet clay walls. Wet clay that appears in shades of red. And all the victims in this room start out wearing red clothes. Is this prophetic, or is this some form of inspiration? I don’t know the answer, but it’s certainly interesting.

Here is another a minor — yet somewhat prophetic — detail that appears early on in the movie: Nicki Brand (Debbie Harry) is a popular radio show host who strikes up a sexual (and sadomasochistic) relationship with Renn. When Renn visits her studio following their first meeting on a talk show, we see that she hosts a hotline for people who are undergoing distress. What struck me as interesting on my latest watch of the movie is that the way she speaks is evocative of modern-day ASMR.

All-in-all, Videodrome is a masterful work by a director known for his work in the genre. It’s a little disappointing that a movie of this calibre has gone so far under the radar in this day and age. Whether or not the movie will see a resurgence in popularity given the times we live in (I hope there is never a remake) will be interesting to see as the next few years go by, but it does deserve to be higher in the public consciousness.

Disturbing, lurid, and yet thoughtful, Videodrome is unfortunately not for everyone. The movie contains quite a lot of gore, and therefore I can’t recommend it to everyone, although I highly recommend the movie as a whole. The movie also features a style of filmmaking that is typically 80s — a kind of aesthetic in both pacing and framing that relates it to other masterworks of horror such as Possession.

The ending is actually ambiguous, given the nature of Renn’s condition, but I have made up my mind about the “New Flesh”, as the movie calls it. I think there is somewhat of a lesson in Renn’s emancipation, and I think it’s a lesson that’s very relevant to our times.

Videodrome deserves all the accolades I have given it over the years, and I expect it to continue to find relevance to our human condition as the years go by.

Leave a Reply to Analysis / Review: Death Stranding [2019]; Part One: In Which We Hereby Enter Into a Contract – The Corvid Review Cancel reply