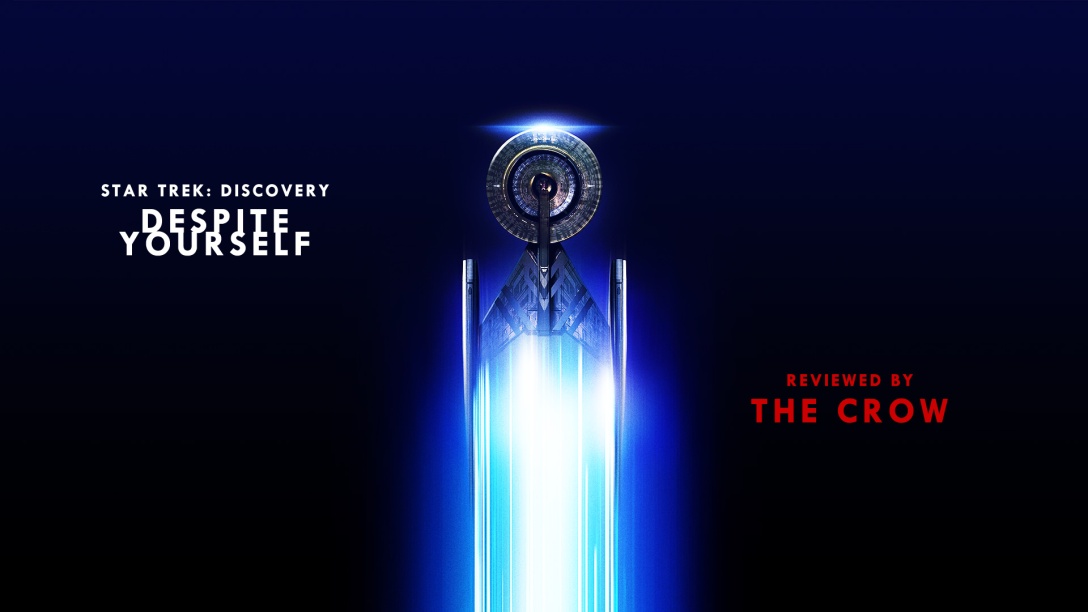 Captain’s log, Stardate 95623.39: These are the voyages of the blog-ship The Corvid Review. One of its continuing missions: to explore strange new episodes of Star Trek, to seek out new characters and plots, to boldly go where no one has gone before.

Captain’s log, supplemental: It’s unfortunate, in a way, that we have to kick off 2018 on The Corvid Review with such little cheer. Hopefully, we’ll be able to tie up the loose ends from last year up in time. We have a considerable number of unfinished posts lined up for release, and it will be a while before we get through all of them. That’s why, for the moment, I’m calling a stop to all new releases.

That is, with the exception of my weekly Star Trek: Discovery reviews.

And this week, in our first review of 2018, we saunter out into unfamiliar territory, and wonder where the hell we are in:

Following the recap, we are thrust back into the final scenes from the previous episode. Victorious over Kol and the Ship of the Dead, the USS Discovery is stranded at the site of a recent large-scale battle near Organia — wreckage from Klingon ships strewn all around them. There is no Starbase here, as was expected (well, to everyone on the ship but one, I wager); so, the question is: where are they?

A Vulcan ship appears, and as the Discovery attempts to make contact with them, the Discovery is treated to a “Vulcan Hello” before the Vulcan ship is wiped out by the incoming starship the Cooper. And the question becomes all the more grating: where are they?

The answer — a simple one to those versed in the lore of the franchise, and quickly revealed to newer members of the audience — is something that was “accidentally” teased long-ago by the director of this episode (Jonathan “Two Takes” Frakes). The USS Discovery has found itself in the Mirror Universe.

Now, the Mirror Universe is a point of contention between most Star Trek fans. I’d wager it’s an even split between those who like it, and those who don’t. Personally, I’ve been quite indifferent towards the whole affair. In general, I find the Mirror Universe episodes okay at best. Keep in mind that I’ve not seen all of them; but at least I’ve read about those I’ve not watched, so I’m no initiate.

And the way the popular alternate reality is dealt with here is in the manner of a slow set-up. We slip into the Mirror Universe, discoveringcough! its ins-and-outs along with the crew as they come to terms with their predicament. And we follow their efforts to “blend in” with their new surroundings as they look for a way to get the hell out of dodge.

And then, of course, we have poor Paul Stamets. As Dr Culber describes him, he’s alternating between episodes of catatonia, and episodes of mindless babbling. He keeps mentioning a “palace”, which I personally felt was quite a change from the “forest” he mentioned in the previous episode (through which “they” go). Culber and Lorca share some weighty scenes of tension early on thanks to his condition, but the episode doesn’t explore this angle much further.

Which is fine because Culber quickly has another problem on his hands: Lt Ash Tyler. Ash, following a meeting with the POW L’Rell, is having doubts about what exactly the Klingons did to him on that Prison Ship. L’Rell, as she promised him, starts to tell him more, and it all leads to Tyler pressing Culber for a closer look into his prison-scars. And things become very dramatic for these two as the episode wears on.

A callback to an earlier episode is thrown in. Stamets’ confusion at seeing his “Captain” in Engineering is revealed to be his foreknowledge that in the Mirror Universe, the USS Discovery is not under the command of Gabriel Lorca, but rather the counterpart of our Cadet Tilly. In keeping with their going undercover, Tilly is quickly propped up as a puppet captain of the ship, which is painted over into the ISS Discovery.

Not only does this episode contain the vindication of fan theories that have been circulating on the internet since the release of Star Trek: Discovery, but I’m convinced that the team behind the show have been looking out at us writing and talking about the show as well. I distinctly remember someone joking on a post-episode discussion thread on /r/startrek about Tilly possibly dying in one of the early episodes. The exact words the Redditor used were: “You no killy my Tilly”. And wouldn’t you know it? “Captain Tilly”, it just so happens, is also known as “Captain Killy” (a name immediately lampshaded and rubbished by Lt Saru).

Now, that might be a small example, and quite an obvious joke. But that’s not the only time I noticed something like this.

Tilly is on good form in this episode, and I found her scenes as the Captain of the Discovery a perfect balance between comedic and authoritative. Lorca, as usual, is the boss character on display, even though he has relatively little to do in this episode. There is a specific scene before he ‘enters’ the Mirror Universe (so to speak) which really smasheswink-wink! home his commitment to the job. Burnham is standard Burnham, and we see little special from her in this episode up until the near-end. Saru is kept off-screen for the most part, and Stamets just… is.

As with every Mirror Universe episode, we meet a few counterpart characters, and they’re played straight for what they are. A character I’d picked out as being important from the Battle At the Binary Stars reappears in a strong showing (the characters at large need to pick a preposition and stick with it during dialogue) and set up the most well-choreographed fistfight I think I’ve ever seen in a Star Trek episode.

But… the problems with the show persist. While the writing has improved to a considerable degree, cracks still show in it. There are a few decisions some characters take which could be considered infuriating (and some have been infuriated by them), but I can chalk these moments down to general human nature. That said, the ending left me a little less than amused. Two characters make a decision which would usually be par-for-the-course, if not for the shot that follows immediately after and shows how callous they’ve been. Surely — I thought — that could’ve been avoided by any number of means. It’s not something that can just be stopped, but it can be shortened, and I was well displeased with the sequence.

But, all-in-all, not a bad episode at all. It’s not great, but it picks up just fine after the mid-season finale and sets a precedent for the remainder of the first series. I just wish the writing were a little bit better. “Two Takes” as director, has always been solid, and he continues to be. A few visual effects, I felt could have been toned down near the beginning. But as the episode went on, the episode settled into its own pace, and could at points even be considered a visual treat. The backing score for the scenes involving the Terran Empire hearken back to very classical themes from the franchise to a degree, and fit the story pretty well.

Good job, all around. But it could’ve been better.

This is your final warning.

Failure to comply will result in your being spoiled.

First: Okay. Done. Ash = Voq. They’ve finally done it, and even explained the basics of what happened to our fanatic Klingon. It’s going to be fun seeing how the show deals with this plot-line. Which leads us to…

Point the second: Culber. If you thought Landry’s death was sudden, you are not prepared for what happens to dear Hugh. However, reading articles that were published around the time of the episode’s US release, I think my post-viewing shock has been put out. Cruz states outright that Culber is not gone for long. I don’t usually care much for spoilers, but I’d have liked not to know that piece of information. And finally… point the third: Stamets. So, what is going on with Stamets? Has he gone Gary Mitchell? It certainly seems so, but only time will tell.

I’m looking forward to the next episode. I want to see Lorca’s face once he’s out of the agony booth and sets his eyes on Captain Burnham of the ISS Shenzhou. I want to see the aftermath of Hugh’s death. I want to finally meet the “faceless emperor” (who we all know will turn out to be Empress Philippa Georgiou — bonus points for killer beard!). I want to see French-bearded Sarek. And I want to finally see Star Trek: Discovery‘s take on Andorians (we only get a blob in this one).

See you all next week. LLAP.