a review by the Azure-winged Magpie.

Hello-hello! Hello one! Hello all! Welcome you lot! Today on The Corvid Review, this Magpie’s gonna break down one of her all-time favourite films: Akira!

The Crow wanted to do this one. But I beat him up and chased him away. This now mah house!

So… anyways. I guess I should start things here by talking about the story.

That’s what we start with. After World War III settles down, Neo-Tokyo is built. It’s about to host the 2020 Olympics (go Team GB!) but things all over are going tits up. In 2019 the city is something out of every cyberpunk nut’s wet dream.

Bōsōzoku biker gangs run the streets. Violence is everywhere. There are constant riots.

In the middle of all this we are introduced to two of our main characters: Kaneda and Tetsuo. They (along with the rest of the Capsule gang) get into a fight with a rival Bōsōzoku gang (the Clowns). While they’re all fighting while racing across the city, a man is escorting a blue-skinned kid (apparently a kid, anyways) through rioters while dodging army-types who’re hot on their heels.

Tetsuo swerves to avoid the kid after his escort is gunned down – and ends up crashing his bike. And the JSDF arrives to clean the mess up.

Tetsuo and the blue kid (Takashi) are taken away by the JSDF. The rest of the gang are locked up in a busy and very crowded police station. Kaneda sees this girl Kei and has a kinda nearly-instant crush on her. He manages to get her set free along with his gang – but she leaves the boys shortly after.

At the hospital it’s revealed that Tetsuo has psychic powers similar to the blue kid and his two friends (Masaru and Kiyoko) – the “espers”. It’s also revealed that years ago, there was another esper named Akira (roll credits!) Akira was a super-powerful esper who was the cause of the “nuke” incident at the beginning of the film.

Over the course of the film we see that Akira’s memory has spawned both religions and fear. And Tetsuo’s powers seem to be potentially at his level. The leader of the JSDF (Col. Shikishima) ponders maybe killing Tetsuo (who’s unable to control the awakening of his powers) to prevent any such future incidents. 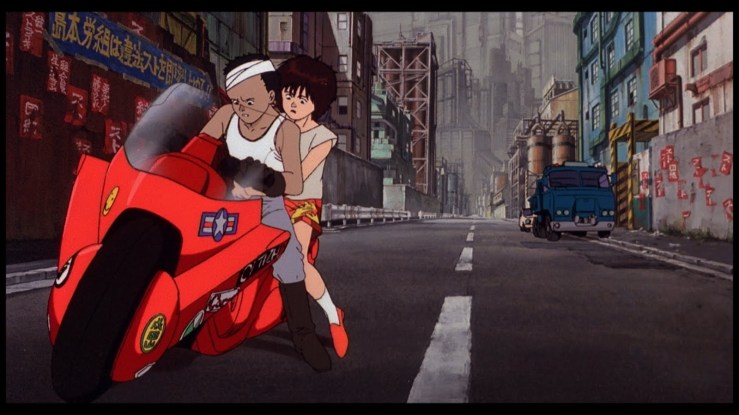 Things go total tits-up when Tetsuo (after an unsuccessful attempt at trying to escape the hospital) starts gaining minor control of his powers. After a fight with the other three espers – which Tetsuo wins, the hotheaded little shit figures out where Akira is being kept and flies off to find him.

And from there on out the movie accelerates into a pretty high-strung action movie. After a long and drawn out fight Tetsuo starts losing control over his rapidly-accelerating powers. I won’t spoil what happens next because it’s much better you check it out for your own selfsies. What I will do though is point you to what the film is about (other than just being a SF/body-horror film with some minor dimension-hopping elements) and what I think of it on the whole.

Akira’s awesomely put together. It’s a pretty pretty film (not Azure-winged Magpie pretty – but pretty). The OST is fucking awesome (hee… HA! hee… HA!). It’s a really weird soundtrack to listen to when you hear it on its tod – but it sums up the feel the film’s going for perfectly.

Our main character is Kaneda – and we don’t really know much about him. Tetsuo counts as a co-main character and serves as the “big bad” of the movie. And we get to know a little about him. The character we end up learning the most about has nothing more than a cameo appearance in his own damn movie. But that’s no problem: Akira’s too cool to flash himself at us for more than a few minutes anyway.

Akira’s also a film that talks about Japan. It’s a snapshot of Japan in 1988. Just like in my review of Tetsuo: The Iron Man (which I claim must have been in part inspired by Akira because of how similar some things are), Akira is a film that talks about Japan in the mid/late 80s and looks at post-War/post-resurgence Japan being pulled this way and that by Western influence. Just look at our main characters and ask yourself: where are these kids’ parents?! Where are anyone’s parents? There’s a lot of easter-egg-like meanings in the movie if you look closely. And you don’t even need to have a detailed knowledge of Japan at the time to find them either.

Now while I love me some manga – I haven’t actually read Akira. The film is an adaptation of only the first chunk of the manga and so there’s obviously something beyond “I am Tetsuo” to be found. But Akira the film was directed by Katushiro Otomo – the mangaka behind the manga; so no one can complain about the cut. 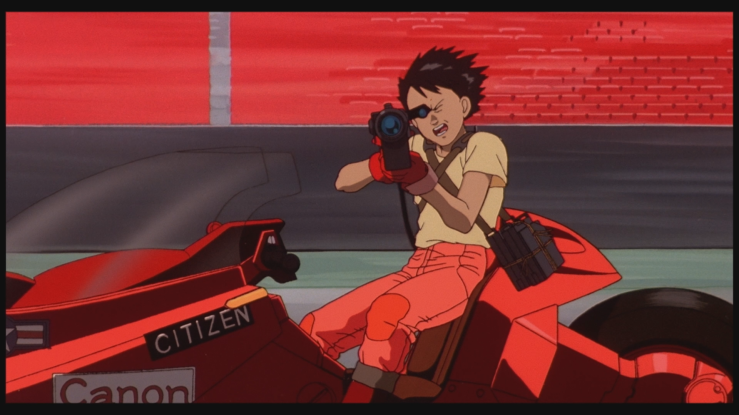 It’s really hard to talk about a film that you love so much without fangirling. The Crow’s told me to tone down my fangirling when talking about films I really like – and that made this post a real bitch to write. So sorry I was a little late with this one.

Akira’s a great film. It kinda sorta made anime popular in the West. With the likes of Ghost in the Shell and Princess Mononoke coming out in the years after Akira – the world kinda had to fall in love with anime. It’s no surprise Akira’s still counted as one of the best anime films (if not the best) of all time.

If you haven’t watched it yet – watch it now. Or else…

Next up, I’ll probably be looking at Berserk, but the Crow and I might be doing some other posts before I’ve had the chance to rewatch the whole series.